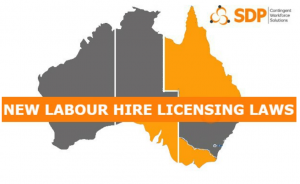 The Labour Hire Licensing Act 2017 requires anyone who provides labour hire in South Australia to be licensed.

However South Australia has had a prolonged implementation of labour hire licensing, beginning in 2017 when they passed the Labour Hire Licensing Act 2017. It commenced on 1st March 2018, but before it fully came into effect, a change in government occurred and it was announced that the Labour Hire Licensing Act would be repealed before the end of the year. However, there was not enough support to abolish the legislation and the licensing scheme has recently been reinstated.
END_OF_DOCUMENT_TOKEN_TO_BE_REPLACED

Are you asking yourself – Do I need to register for a Labour Hire Licence in QLD or does SDP? Simple answer – we both do.

You must register by 15th June 2018 – go to the licencing website at https://www.labourhire.qld.gov.au the application takes about 15-20 minutes.
To apply for a licence, you will need to register to create an account and provide:

END_OF_DOCUMENT_TOKEN_TO_BE_REPLACED

The Government have announced a new visa program ‘The Global Talent Scheme’ aimed to attract highly skilled global talent and deliver innovation to Australia will be introduced from 1 July of this year.
END_OF_DOCUMENT_TOKEN_TO_BE_REPLACED