We’ve all heard the saying ‘better late than never’, but scrap that we want on time, every time! 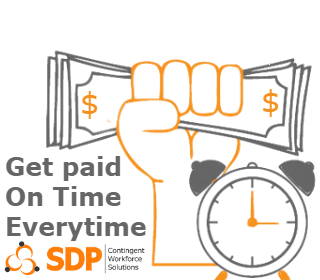 If I had a dollar for every time a new contractor came on board with us because they were fed up of not getting paid on time, not getting the correct amount of even fed up of chasing payments… Well let’s just say I would have a lot of dollars.

Onboarding contractors and processing payroll for hundreds of contractors each week I know too well the importance of timely and correct payments to contractors.

According to the US Freelancers Union 71% of independent workers reported that they have had trouble getting paid at some point in their careers. Here in Australia, the size of the contingent workforce is expected to grow from 30% to 50% by 2020.

Inconsistencies in payroll to contractors is just not on, ok being a contractor does have its big advantages, but with great power comes with great responsibility. For example, accepting that there is no job security, annual leave, sick pay and with no income during temporary pauses in workload. This is why getting paid on time every time is so important.

According to The Late Payment Report (2016), Australian Businesses are the worst in the world at paying their bills on time, the average amount of time it takes for an invoice to be paid in Australia is 26.4 days overdue.

I spoke with one of our new contractors who came on board with us about a month ago. I wanted to follow up on how he was getting on with us at SDP Solutions and to see why he decided to jump on board with a contractor management company.

For privacy reasons I am going to call him Bill, let me tell you a little bit about Bill, Bill is an IT contractor who moved into contracting roughly about 10 months ago. With over 20 years of working as an employee, Bill’s reasons for going out alone was that he wanted the freedom and flexibility of being his own boss and the diversity in working as a contractor. He set up shop as a Pty Contractor, taking care of the legalities and insurances as required.

Bill said he has come a long way from his first contract as a Program Manager, he said he would never forget the heart ache of waiting on payments, he said his invoices may as well have been mailed to the Man on the Moon, as his payment terms were clearly just decoration on his invoices.

Bill lost count of the amount of emails he would send to the accounts team, phone calls chasing payments. For the 3 months he was on that project he recalled only one time being paid on time.

He explained that many contracting assignments were similar, unpaid invoices cost him a lot – account charges for missed direct debits, added stress, time and pressure; not what he envisioned for his freedom and flexibility of working as a contractor. This was one of the main reasons he said he decided to engage SDP Solutions, contractor management company, he says the weight has definitely been lifted off his shoulders. 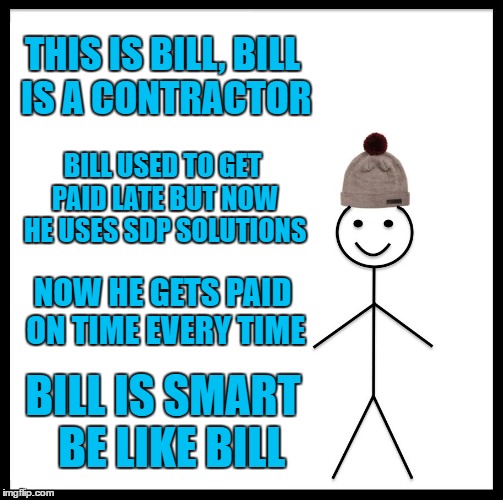 Are you a contractor, do you have any horror stories regarding late payments or what gives you the biggest headache?